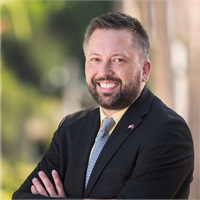 Edward (Eddy) Schuh was born and raised in St. Louis, Missouri where his family instilled traditional Midwest values including working hard and treating everyone as they want to be treated. Upon completing his secondary education, Eddy joined and served in the United
States Marine Corps which brought him to Southern California. It was his service in the military that gave him the discipline and motivation to achieve any goal.

After the military, Eddy worked as an engineer while simultaneously studying for his degree in Finance at Southern New Hampshire University. In 2016, his dream of owning his own financial services business came true as he founded Inception Financial Services with business partner Ken Taing, CPA. Together they developed the strategies that set Inception Financial Services apart from traditional institutions.

As a Fiduciary Advisor, the core of Eddy’s belief system is based on the foundation of doing what is in the best interest of the client. “If I do not provide my client the best service and provide a plan that is in his/her best interest, not only am I not doing my job, I wouldn’t be able to sleep well at night!” He not only dedicates his professional work to educating clients of the current pitfalls of traditional retirement planning, but he has provided educational classes for Southern California employers to help their teams understand the best, most
impactful ways to save for their future.

Eddy approaches every client with the “Advisor for Life” mentality. Advisor for Life is the concept that no financial plan is perfect forever and may need adjustments along life’s paths. The Advisor for Life is there to review the performance of the plan and to help
make any adjustments that may be needed depending on changing goals or changing family dynamics. “Your Advisor should be there for you for the rest of your life, it should be someone you like and most importantly someone you trust.”

Eddy and his wife Michelle have been together for over ten years and when time allows, they enjoy travelling to see as much of the world as they can. In his spare time, he enjoys playing tennis and golf or the occasional paddle boarding with Michelle in the Redondo Beach Harbor.